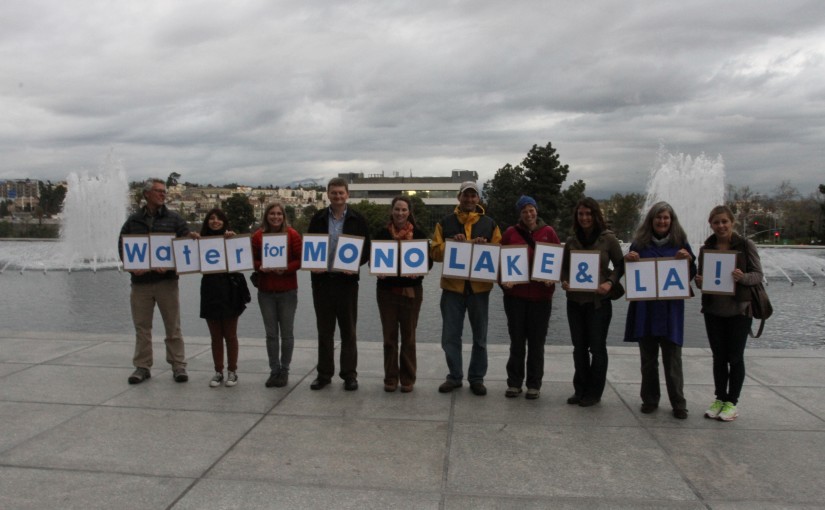 “When we try to pick out anything by itself, we find it hitched to everything else in the universe.”

Everyone benefits when there is water in Mono Lake—from Los Angeles residents who rely on Mono Basin streams for some of their water, to visitors to the Mono Basin who seek a peaceful wilderness experience, to the millions of birds, brine shrimp, and other life who call this place home.

The Mono Lake Committee is here to make sure it stays that way. If you would like to join the 16,000 members across the world who have already given their support to Mono Lake, you can join today online or at our Information Center & Bookstore in Lee Vining. Otherwise, if you’d like to stay up to date with what is happening here, we would love to send you news from Mono Lake. Thank you for taking this self-guided tour of South Tufa—we hope you enjoyed it.

Continue exploring South Tufa, or continue on the trail to loop back to the parking area. 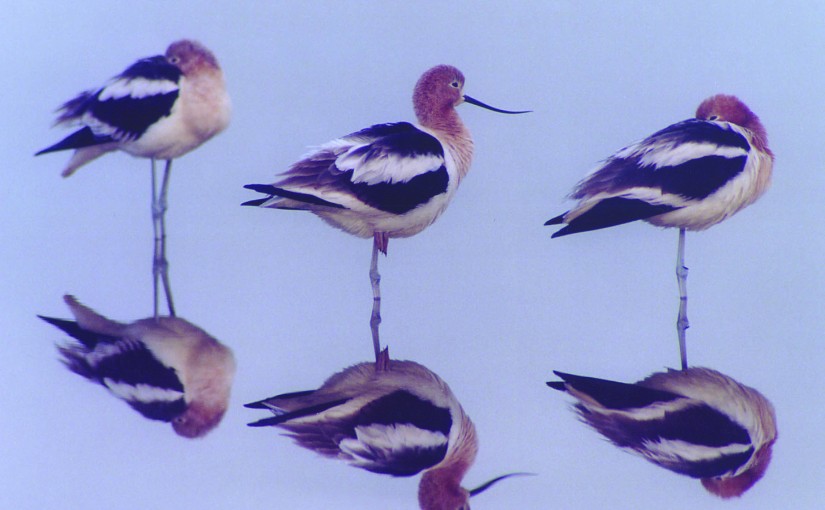 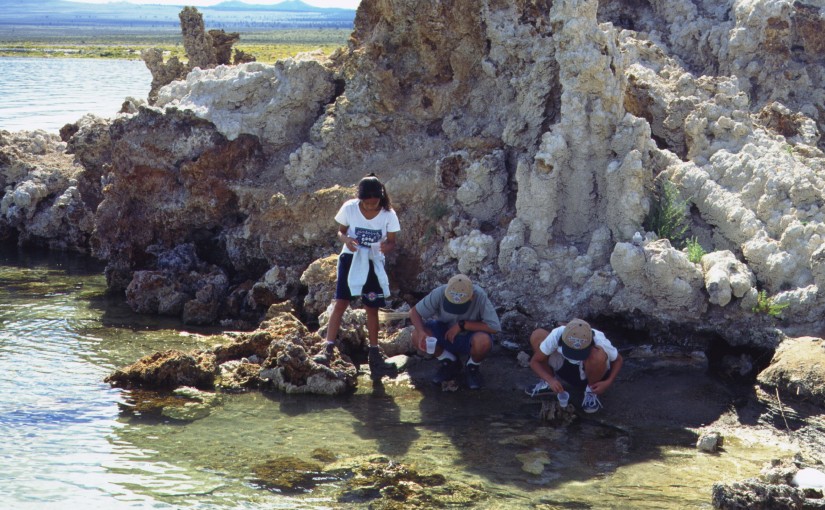 Mono Lake is like an all-you-can-eat buffet of flies and shrimp for the millions of birds that come here.

As you walk along the shore, you may notice swarms of alkali flies buzzing about, but don’t worry, these flies are just feeding on algae and will not bite you. These amazing creatures have small hairs on their wings which allow them to form an air bubble around themselves so they can “scuba dive” under water for a few minutes.

The flies lay their eggs underwater and these eggs will then hatch into larvae, which will swim in the lake feeding on algae. When a larva is ready to pupate, it will latch on to underwater tufa and form a protective case around itself as it metamorphoses into an adult. The native Kutzadika’a Paiutes collected the fly pupae and dried them in the sun for food rich in fat and protein. If you look under a loose tufa near the shoreline, you may find the fly pupae—a delicious snack. Pull one off and taste it!

You may also see tiny translucent creatures swimming near the surface of the water. These are a native species of brine shrimp, found only in Mono Lake. The shrimp are also feeding on the algae and are expert osmoregulators, like the alkali flies, pumping salts and minerals out of their bodies to survive. In the winter, you will find the water empty of brine shrimp—all of the adults die off as the temperature drops, but a new generation of shrimp will hatch in early spring from eggs that overwinter at the bottom of the lake.

Continue following the trail among the tufa towers, looking closely for the birds described on the following page. 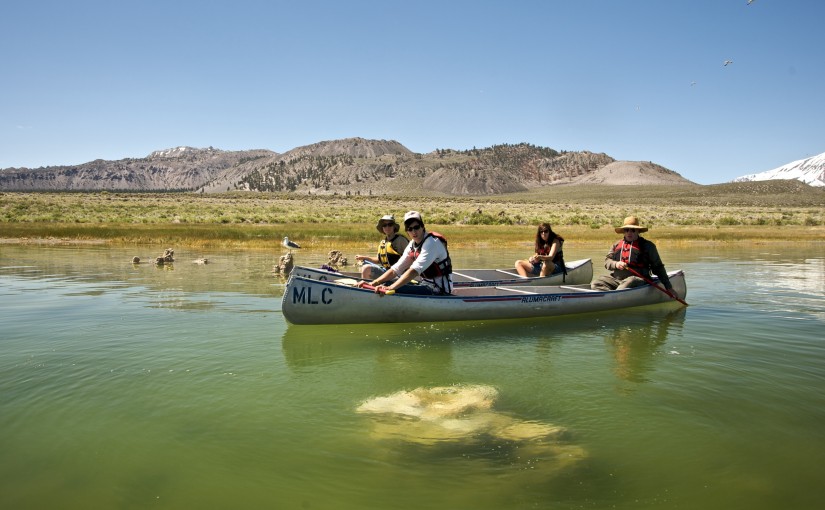 Have you ever gone for a swim in Mono Lake? The lake is 2.5 times saltier than the ocean so you can easily kick back and float in the water. But why is this a salt-water lake? Because Mono does not have an outlet stream, water flows into the lake, but can only leave through evaporation; therefore, in this terminal lake, as pure water evaporates, salts and minerals that flow into the lake get more concentrated over time.

Put your hand in the water and rub your fingers together. What does the water feel like? Slimy? Maybe slippery or soapy? Mono Lake has very unusual water chemistry and is full of carbonates, sulfates, and chlorides. These minerals give the lake a relatively high pH of about 10. This high alkalinity is why there are no fish in Mono Lake, though there is fossil evidence showing that fish once swam in Mono Lake when the water chemistry was much different.

Follow the shoreline and look for swarming alkali flies near the water. 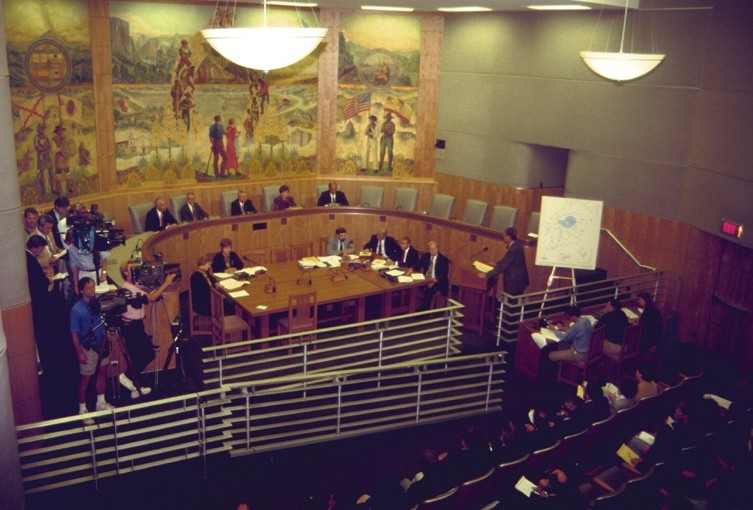 Where you stand now is the management level for Mono Lake—6,392 feet in elevation. One day, Mono Lake’s water will again reach this level, but ensuring this was a long struggle.

In 1976, a group of researchers, including David Gaines, came to the Mono Basin and found if the lake continued to drop and increase in salinity, there would be a total ecosystem collapse. The decreasing lake level caused the islands where California Gulls nest to become connected to the mainland. The brine shrimp and alkali flies which millions of migratory birds depend on were also threatened, due to the increasing salinity.

Inspired to act, two years later, David Gaines and several others founded the Mono Lake Committee—a non-profit citizens group dedicated to protecting and restoring Mono Lake, and educating people about this remarkable place. Gaines went around the state giving Mono Lake a voice and telling people what was at stake if this ecosystem collapsed and the public responded. Inspired by Gaines’s vision, the Committee grew to 20,000 members and attained legal protection for the lake.

The struggle to save Mono Lake got a big boost after it was decided the public trust doctrine, which states that resources belong to all people for values including wildlife habitat, nature study, and scenic beauty, applies at Mono Lake. This ultimately spurred the landmark decision in 1994 when the State Water Board modified DWP’s diversion licenses to protect the lake and its tributary streams.

The State Water Board ordered DWP to allow the lake to reach a healthy level of 6,392 feet. Now the amount of water Los Angeles can take each year depends on the lake level. Moreover, DWP was charged with restoring the stream and waterfowl habitat that suffered from the dry streambeds. Today the Mono Lake Committee continues to make sure the decision and protections put in place are upheld.

The Committee has also worked with Los Angeles to encourage water conservation. In the 1990s, the Committee, along with other organizations, worked with LA to replace over one-million water consumptive toilets, saving eight billion gallons of water a year. Los Angeles continues to be water-conscious by using water reclamation, incentives for lawn replacement, and storm water recapture. Today, the city uses less water than it did 40 years ago, despite a 25% growth in population.

Look toward where the water is today, and imagine it lapping at your feet right here. That rise in lake level that will happen in the years to come represents thousands of people fighting for Mono Lake. You too can join the fight to keep saving Mono Lake by becoming a member!

Continue toward the lake until you reach the shoreline.

Tufa—from the Latin tōphus, meaning “porous rock”—forms underwater. Underneath the lake there are fractures which allow calcium-rich spring water to seep through the lake bottom. This calcium-rich freshwater then mixes with the carbonate-rich lake water to form calcium carbonate, or limestone. This is the same composition as stalactites and stalagmites found in caves, but tufa can form much faster than these formations, sometimes growing inches in a few days.

Be sure not to climb or stand on the tufa towers or take any tufa home so others can continue to enjoy this beautiful and fragile landscape.

Since these towers were once completely underwater, it begs the question—why is the lake so much lower today? In 1941, Los Angeles Department of Water & Power began diverting water from four of the freshwater streams that feed Mono Lake. Between 1941 and the early 1980s, the lake dropped 45 vertical feet, losing half its volume and doubling in salinity. Luckily, the water story does not end there.

Continue toward the lake, stopping where the wooden boardwalk begins.

Can you find these three common plants of the Mono Basin? 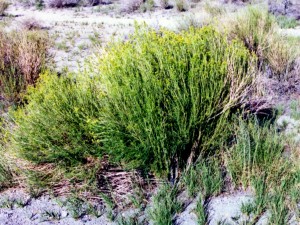 Rubber Rabbitbrush: Known for its bright green color and vibrant yellow flowers in late summer, this shrub dominates the area. As you walk down the path, look to your left and notice the spread of rabbitbrush. As the lake level dropped, this pioneer shrub came in, thriving in the salty, alkaline soil. 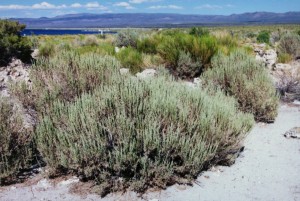 Big Sagebrush: There’s nothing quite like the smell of sagebrush after a summer storm in the basin. This shrub is one of the most abundant in North America, and it’s upward pointing hairy leaves allow it to effectively hold water in this harsh environment. Look for its gray-green leaves and brush your hand over the plant to release its delicious smell. 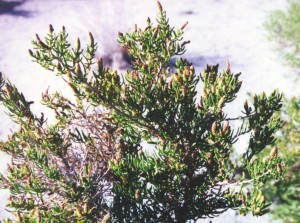 Caterpillar Greasewood: This woody shrub has an unusual name due to its red flowers, which look like caterpillars when in bloom. Greasewood roots extend down as far as 50 feet, so it is an indicator of underground freshwater springs.

Stop at the first short spur trail on the left where there is a large tufa tower near the trail. If you’ve reached the wooden boardwalk, you’ve gone too far.